Mutations in ASPM are the most frequent cause of microcephaly, a disorder characterized by reduced brain size at birth. ASPM is recognized as a major regulator of brain size, yet its role during neural development remains poorly understood. Moreover, the role of ASPM proteins in invertebrate brain morphogenesis has never been investigated. Here, we characterized the function of the Drosophila ASPM orthologue, Asp, and found that asp mutants present severe defects in brain size and neuroepithelium morphogenesis. We show that size reduction depends on the mitotic function of Asp, whereas regulation of tissue shape depends on an uncharacterized function. Asp interacts with myosin II regulating its polarized distribution along the apico-basal axis. In the absence of Asp, mislocalization of myosin II results in interkinetic nuclear migration and tissue architecture defects. We propose that Asp regulates neuroepithelium morphogenesis through myosin-II-mediated structural and mechanical processes to maintain force balance and tissue cohesiveness. 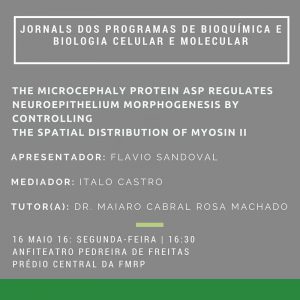