Antioxidants in the diet and supplements are widely used to protect against cancer, but clinical trials with antioxidants do not support this concept. Some trials show that antioxidants actually increase cancer risk and a study in mice showed that antioxidants accelerate the progression of primary lung tumors. However, little is known about the impact of antioxidant supplementation on the progression of other types of cancer, including malignant melanoma. We show that administration of N-acetylcysteine (NAC) increases lymph node metastases in an endogenous mouse model of malignant melanoma but has no impact on the number and size of primary tumors. Similarly, NAC and the soluble vitamin E analog Trolox markedly increased the migration and invasive properties of human malignant melanoma cells but did not affect their proliferation. Both antioxidants increased the ratio between reduced and oxidized glutathione in melanoma cells and in lymph node metastases, and the increased migration depended on new glutathione synthesis. Furthermore, both NAC and Trolox increased the activation of the small guanosine triphosphatase (GTPase) RHOA, and blocking downstream RHOA signaling abolished antioxidant-induced migration. These results demonstrate that antioxidants and the glutathione system play a previously unappreciated role in malignant melanoma progression. 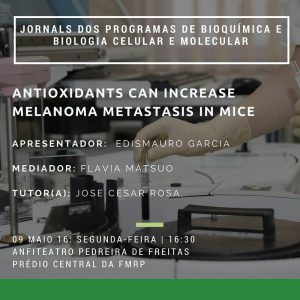